First fire up and running the Engine

After far too long a period not able to work on the car, we attempted to start the engine.

Whilst one of us filled up the fluids (coolant / hydraulic /engine oil) the other finished fitting the air intake and throttle body to the top of the engine.  The oil we are using is millers motor sport break-in.  We also added 20 litres of fresh super unleaded fuel into the tank.  We had drained the old fuel before taking the engine out.

To get the oil pressure up we turned the engine over on the starter motor with the fuel pump disconnected.  It took a minute of two for the fuel to flow once reconnected but the engine didn’t fire up properly!

A quick check and we found some of the coil pack plugs were not pushed all the way in, so we only had sparks on a few cylinders.  With that corrected we tried again and wow how it roared into life.  The light weight flywheel is immediately obvious, letting the engine revs rise really quickly.

We kept the car at a fast idle 2500 revs to bring it up to full temperature, adding more hydraulic fluid to the power steering and coolant as the air bled out of these systems.   After about 30 mins of running we were done. No leaks found and only a few minor pieces to refit before heading out on track to complete the running in. 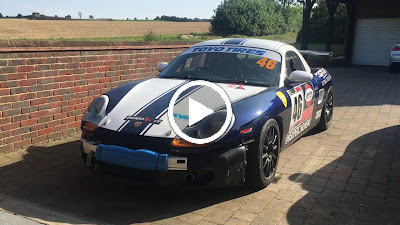 After recurring the front and rear bumpers, under trays and engine covers, we needed to recheck all of  the ride height and alignment before driving the car. This actually needed minimal adjustment so didn’t set up back too much time.

We booked a track day at Snetterton to complete the running in of the engine.  The aim of the day to do as many miles and possible.  On track we limited the engine revs to ~4500rpm for the morning, clocking up over 100 miles around the circuit. 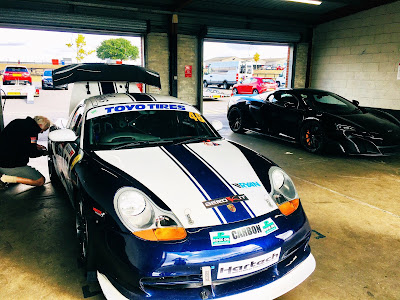 The engine ran fine, so over the lunch break we dropped the running in oil out and switched to our preferred millers nanotech race oil.  Upping the Rev limit during each 30 min session in the afternoon we finished with another 80 miles on the clock and getting up towards the 7000rpm red line. 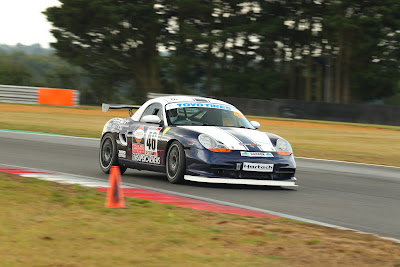 We didn’t time any laps and but the engine felt good and our top speeds were comparable to race conditions so everything seems well.   With the race season pretty much over, we won't be running this year, but know there is relatively little stopping us getting out for some racing next season!

The engine re-install was equally as long and difficult as the removal.   The same process of getting the rear of the car as high as possible to allow the engine to slide underneath the rear worked alright in the end.

With the engine block inched into place and connected to the car via the front engine mount things started to get a bit tricky.  As there is no rear engine mount the block needed to be supported on some extra axle stands whilst we re-fitted the gearbox.  We had made life as easy as possible by purchasing a clutch guide tool to centre the clutch disc and some long M12 studs onto which we could hang the gearbox bell housing. 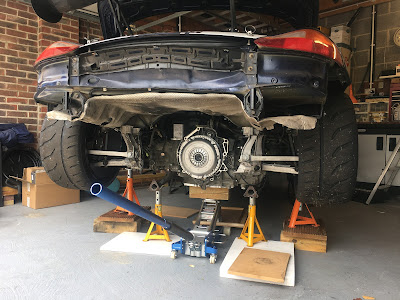 With everything lined up the input shaft should slide straight in and you replace the studs with the various sized bolts.  However the gearbox just would not push on the last inch.  Balancing the gearbox on a jack and getting the right angle felt almost impossible.  The input shaft has 16 splines which need to be perfectly aligned, at the same time the vertical and horizontal angle needs to be perfect.  After several hours and almost at the end of the road we decided the gearbox was definitely lined up and we just needed to be stronger! 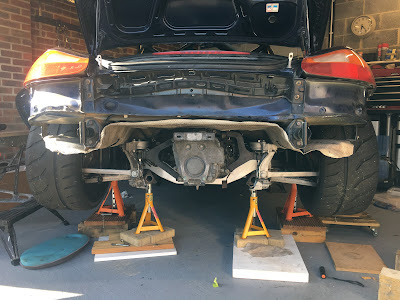 In the end we used the gearbox bolts to pull the gearbox onto the engine the last cm and it seemed to work fine.  Someone has since suggested that a large ratchet strap is the ideal tool to provide enough force.

With that delay dealt with, we returned the next day to complete the job.  The rear engine mounts were re-installed supporting the back of the engine properly now, and the catalytic converter, exhaust and chassis struts were bolted back on.

Underneath the car the fuel, water and hydraulic lines were reconnected, and on the top the electrical connections and wiring loom through into the boot.

We ran out of time to attempt starting the car so need to return to it in a few weeks.

With the long block rebuild completed we’ve been getting on with engine re-assembly prior to refitting into the car.

Progress has been made with all of the ancillaries, vacuum pipes, sensors, inlet manifolds, fuel rails and wiring loom bolted and connected back onto the engine.

We’ve been replacing bolts and cleaning parts along the way. Vacuum pipes in particular caused us a problem with trying to refer back to our notes and photos of where the many different connections go.  Porsche make some things so complicated you couldn’t make it up, with different configurations for year, engine and gearbox types all being unique in some way.

In parallel we have ordered a full set of clutch replacements parts as per the pelican parts guide and will switch to a sport clutch from the standard one.

The gearbox bellhousing was cleaned up and the old clutch release arm and release bearing removed.  A later style 997 arm was fitted with new fittings all round.

The new flywheel was fitted following the torque procedure for the bolts. We then used a clutch fitting tool to centre the clutch plate before fitting the reconditioned clutch pressure plate. 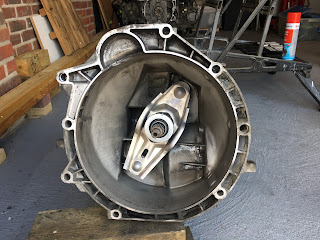 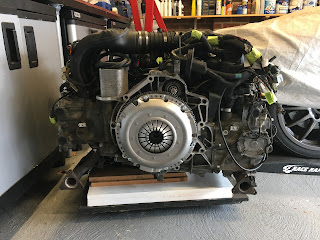 Re-install day should only be a matter of weeks away.

It’s taken a couple of months to decide on a course of action and source the parts to rebuild the engine block.

9-Apart Porsche dismantlers had a good crankshaft of the right type (5 chain rather than the later 3 chain design). Without this there would have been no choice but to go with a second hand engine.   With two of the cylinders scored the option of iron cylinder liners was considered, but in the end we managed to obtain a used crankcase which we preferred. 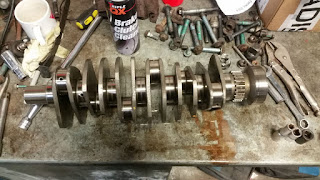 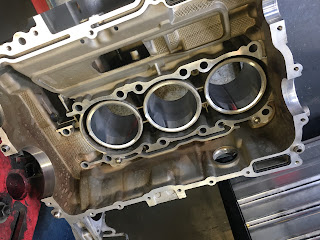 With these key parts sorted we were able to send the cylinder heads away to be skimmed, valve seats re-ground and valves stem seals replaced.

Two of the pistons in cylinders 5 & 6 were scored so we had to replace these with used ones.  The no. 6 conrod was also beyond repair. 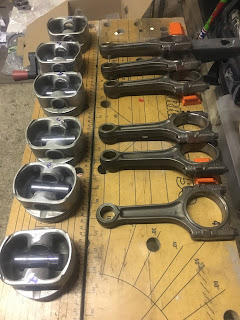 Whilst doing this we balanced all of the pistons and the conrods.  This is fairly simple as they are designed with specific areas where minimal material for balancing can be removed.

Then with the help and expert guidance of Archer Motorsport Services the engine was re-assembled with a standard engine rebuild kit of parts.  This included; 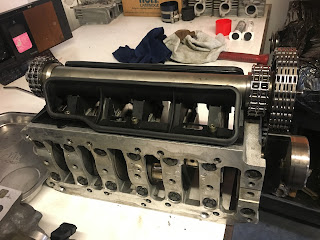 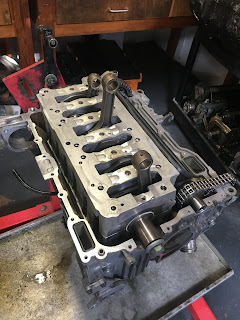 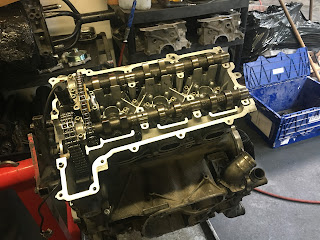 Under hard cornering g-forces the oil can have a tendency to either stay in the cylinder head and not return to the sump or pool in the side of sump away from the oil pickup tube.

To help prevent oil starvation we have fitted the Porsche x51 motorsport sump.  This isn’t a deeper sump but does have larger and improved baffles to ensure that oil returns and stays in the centre of the engine. 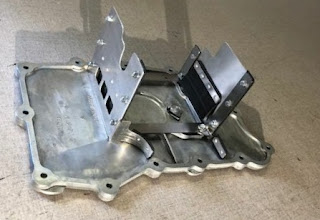 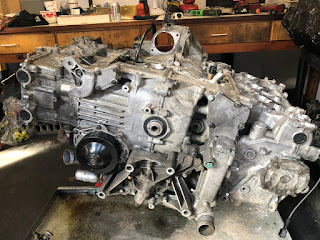 Inside the engine bay we have de-greased and cleaned everywhere, plus repainted the chassis cross member which was starting to rust.

Before reinstalling into the car the engine block needs the intake manifolds, fuel rails and ancillaries refitting.

The final area which will also needs attention is the clutch and flywheel. Both need replacing (as you would expect after 80,000+ miles) along with several parts of the clutch mechanism which wear out.

So still plenty of work to be done before the engine can be run in!

Having got the engine out of the car the remaining ancillaries and intake manifolds etc were removed from the top of the engine, leaving us with what is known as a long block.  It was pretty dirty with oil residue from various leaks over time and a nice coating of Castle Coomb grass! for good measure.

We borrowed an engine crane and loaded the engine into the car, taking it over to Archer Motorsport Services in Hertfordshire.  With some much appreciated help we were able to  dismantle the engine in just under three hours.   The aim was to identify the root cause of the failure, determine if the engine is even rebuild-able or just scrap and form a plan on what to do next.

Working on cylinders 1-3 first the cam covers and camshaft assembly came out pretty easily.  Next the cylinder head bolts are removed and binned.  These are single use so have to be replaced regardless.

The valves and pistons on this side of the engine looked pretty good.   Also there is no sign of bore scoring in the cylinders and only light carbon build up on the pistons.

Moving to the sump we found evidence of a destroyed bearing shell. A lot of fine particles in the oil residue and some larger pieces of metal on the magnetic oil pickup - which isn’t good.

On the cylinder 4-6 side, again the valves and camshafts were the same as 1-3, but removing the cylinder head we could immediately see the piston no.6 was loose with no big end bearing left.  This was the cause of the knocking when the engine ran.

The lack of a bearing shell has caused the conrod to damage the crankshaft surface. This is beyond the amount that can be ground so its scrap.


Cylinder 6 is renowned for oil starvation issues in these engines.  It is the furthest from the oil pump.  This cylinder was showing low compression when we tested the engine a year ago.

It’s a marginal call as to whether to rebuild the engine or replace it with a used engine.  With a used engine likely to have at least 70-80,000 miles there are two considerations.


We think therefore it is worthwhile trying to rebuild our engine.  To do this we need to source a good crankshaft first.   Then we can get cylinders 6 (and possibly 5) re-lined using either steel or Porsche Nikasil liners.  The head will need to be skimmed and the valves lapped, then it can be re-assembled with new consumables, bolts, gaskets and bearings.  Re-assembly should take a day.

Through careful sourcing of the parts we need this should be only marginally more expensive than a used engine - but giving up the piece of mind and greater assurance over the condition of the engine at the end of the process.