Friday practice didn't go as planned, with me going straight on at druids, through the gravel and into the tyre wall towards the end of my first session on track.  From that point onward it was touch and go if we'd be racing or not. 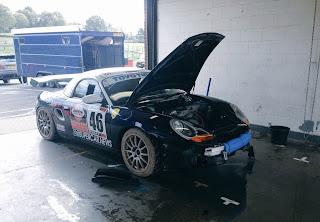 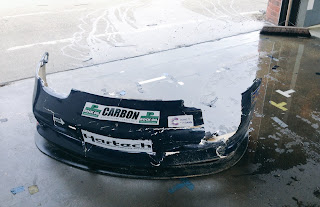 I owe a lot of thanks to other drivers, their friends and machanics who helped to get our car fit to race again over Friday and Saturday.

We borrowed the last front bumper anyone had spare from another competitor  (in bright yellow), bent the wing and radiator mounts back into shape and removed 30kg of gravel from the under-trays. 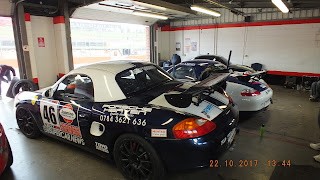 Diagnostics showed a failed ABS wheel speed sensor, so the hub was removed overnight, a new sensor installed and the car frantically readied for qualifying with just minutes to spare on Saturday morning.   ABS was still not working though - so I tiptoed round using only 30% braking in the wet conditions happy to just get onto the back of the grid.
More help was offered, wiring diagrams were found and multi-meters set to work identifying a broken wire to the ABS sensor.  With a new wire spliced into the loom, ABS warning lights were cleared and we were ready to go racing in the afternoon. 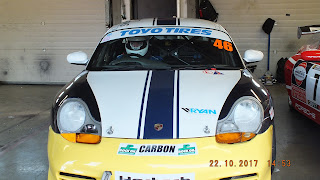 When the ABS fails on the Porsche it's not like driving a non-ABS car, the pedal is extremely sensitive to pressure. If you apply more than 30-40% braking pressure all four wheels lock instantly giving you no time to recovery your braking.  In the wet when you want gentle braking I was able to drive around it albeit several seconds a lap off the pace.

Race 1 - Saturday PM
A torrential downpour just before our race made a wet track a river of water, and we had essentially a dry suspension setup.

Starting last in class I couldn't see a thing for spray, spinning up the wheels in 2nd gear and lost a load of places.  I was stuck behind a new driver and didn't want to risk any front bumper damage. This put me back in 20th place behind slower class cars as it thinned out round the first lap.

One by one I had to picked off the cars on a wet track, finally getting up 9th and onto the back of the Boxsters at the flag.  A decent effort given the first lap. 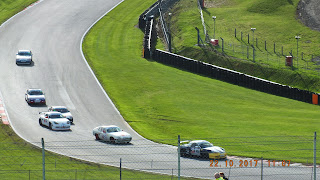 Race 2 - Sunday AM
Brands Hatch is the only track where a hand-brake is useful on the grid. I was rolling so couldn't pin the revs at the start - needing my right foot on the brake until the lights went out. I lost a couple of places round the first lap after getting boxed in behind a slow starting car in front.

By half distance I'd pulled back 3 places with some well setup overtakes and was lapping consistently and quickly, managing the gap behind me as the pack in front were a bridge to far ahead. 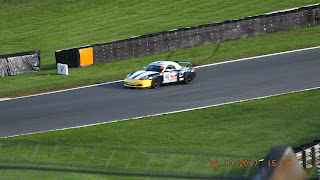 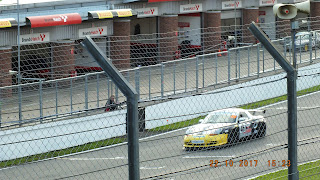 Race 3 - Sunday PM
Starting on the flat part of the grid this time - so was able to get the start I wanted.  Until I got pushed out wide around graham hill bend, lost mementurn and 3 cars came past!

Setup changes I made weren't working as I expected so it was harder to drive with more understeer out of the corners than I wanted.  It took a few laps until I got up to speed and closed on the pack in front. Diving up the inside of paddock hill as they lapped slower cars, the slightest of touches upset the balance of the car and sent me into a 180 spin. The car stalled and I went backwards, stranded in a dangerous place causing the safety car and the end of my race.

Not the best set of finishes, but yet again we've overcome some really difficult challenges and are extremely grateful for the collective knowledge to support of the other drivers and mechanics. 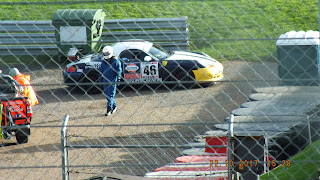 During the weekend we ran some different cameras on the front and rear which gives a better view of how close the racing is.