We turned up at the Rockingham Motor Speedway early Saturday.  The wind was blowing in the outer paddock and there was a threat of rain later in the day. Our car was prepped so there was plenty of time to chat with other drivers before the mandatory drivers briefing. Track limits and giving each other room into the first hairpin were the main topics and warnings  to all drivers.

A last minute drama with our car battery not holding charge properly meant I kept the engine running as I waited to out for qualifying.   The cars were released in the wrong order so I sat in the pit lane airing for a clear track before heading out. The 20 min session went well, but with intermittent rain on one side of the circuit you didn't quite know how hard to push on some laps.

I got piped for 4th place right at the end of the session so would start on the 3rd row of the grid.

The afternoon was spent weather watching as showers rolled in - tipped it down - then dissipated and the track dried out in an almost hourly cycle.  We got lucky with a dry spell in the end.   I lost out off the grid with a car coming across in front of me sharply causing me to brake when I should have been accelerating.   This put me into a quartet of cars racing for 6th place.  I tried inside and outside of almost every corner to pass, finally going round the outside of the Tarzan hairpin, only to fail to find 3rd gear onto the main straight gifting the place back.  It bucketed down with rain on the last lap and I struggled o make it back to park ferme without crashing.  8th place finish wasn't the best result.


T
he evening social kicked off with a BBQ selection of food and beers in the hospitality tent with guitar entertainment from friend of the series and commentator Jake Sanson.

Race 2
Sunday - and the sun came out later in the morning making for a nice day watching some of the other races as we waited for out time slot.  Starting further back I got a good start around the outside of turn 2 picking up several places.  Something came loose under my feet and was sliding around, jamming under the pedals every time I braked though! I soldiered on just about maintaining my position but dropping back, when the safety car came out.   I fished around under my seat and threw the offending plastic footrest cover out the window.  As the safety pulled off I was back up to full speed getting 5th place on the penultimate lap when the car in front overshot with brake issues. 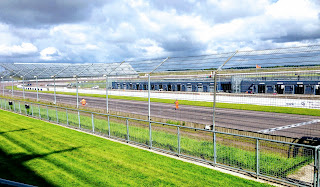 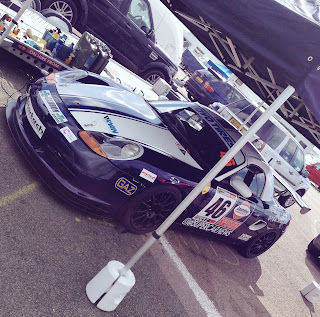 Race 3
Starting high on the outside I got my best start ever at Rockingham slotting into 4th around the hairpin.  It was short-lived as red flags came out immediately and we returned to the grid for a restart.  Four cars got tangled on the banked first turn - two had hit the wall and needed recovering.  The drivers were all OK and we restarted after a 10 minute delay.
My start wasn't quite as good but I managed 5th place.  As the race progressed I was comfortable with no pressure from car behind, but just not quick enough to bridge the gap to the front pack.

Overall a fantastic weekend of racing with no incidents, dramas or damage for me and some good finished given we didn't test and had been out of the car since June.

Next month we race on the prestigious end-of-season Formula Ford festival under-card at Brands Hatch.