When the rear end of the car feels odd, you tend to notice it straight away.  Strapped into the fixed bucket seat, you are directly connected to the car.  Just a little vibration, ignore it.... concentrate on racing.  Then its back, the vibration and now a deep rumbling noise getting stronger. OK last lap, forget about chasing down the cars in front, shift up earlier, run a gear higher through each corner, nurse the car home whilst trying to limit the overall lap time loss.

This was me in the final laps of our last race weekend at Snetterton.  When I got back to park ferme, I found two broken off wheel nuts on one of the rear wheels.  A pretty lucky escape that they had held up until the end. What I hadn't noticed was the dent in the front wing, which was scrubbing the tyre, wearing it away lap by lap.  I'm not sure which would be worse - a tyre blow out or a wheel coming off.  Neither preferably.

So a few weeks ago we set about fixing the various issues.

First a used rear bumper was bought from a dismantler.  This is a simple replacement, but we first fitted new rear wheel arch liners to ensure all the factory bumper mounting points were restored.  These being broken off was the ultimate cause of the bumper coming off mid race. 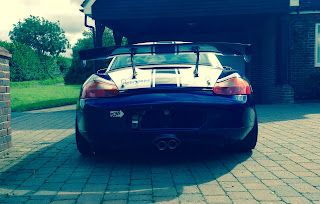 Next we set about investigating the wheel stud failures.  The worry was that all of them could be failing in the same way, so we changed supplier and ordered a complete new set plus spares.  Better to be on the safe side. 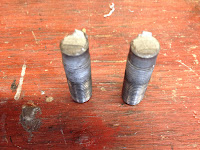 As it turned out the two failed studs had cracked as some point in the past, and gradually the fracture got bigger and bigger over time.  We think we did the wheels up once with the spacer not straight which could have caused them to bend.

Removing and replacing the stud is straightforward.  We use conversion studs, so some heat from a blow torch for ~60 seconds melts the Loctite thread lock.  Two nuts locked together are then used unwind the stud.  The new studs have a hex key slot in the end, so just apply Loctite and wind them in as far as they go. 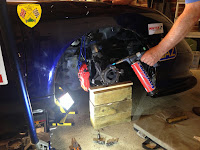 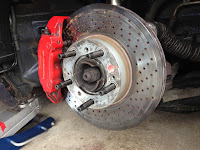 The broken studs took longer, drilling out a 6mm hole in the centre, then inserting a stud extractor tool to grip the remaining stub of the stud as the heat is applied.

Our final task was to sort the damaged front wing out.  The dent could be pulled out, filled and painted, but its far easier to unbolt the wing and replace with a matching used one.  This took about an hour, the hardest part is re-aligning the headlight tray to get the headlight to go straight (and stay locked in place). 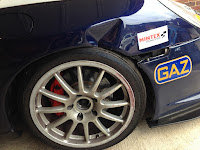 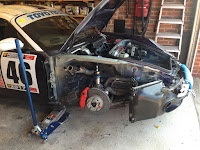 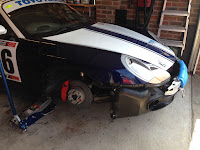 In a few weeks time we are heading to Rockingham in Corby where the aero wing and front splitter should see higher speeds than ever before on the banked oval section of the track.

There is no opportunity to practice before-hand so I'll be heading straight out into qualifying to see how the car handles.