The Sunday of the Silverstone weekend, and final day of 2016 racing started with torrential rain.  We arrived at the circuit after our usual stay at the Holiday inn express. (Our preferred brand of cheap free breakfast hotel).

It takes around 30 mins to change the car setup, softening the dampers and roll bars all round.  We refuelled and headed to the assembly area with a battery booster pack at the ready in case the engine wouldn't start again.

It had stopped raining and the sun came out as we waited for church bells at 11am and then fired up the engines. The battery charge was seemingly holding ok now.

I did noticed some teams changing dampers seconds before we went out as it looked to be drying.  The circuit was in fact drenched and I aquaplaned around the two green flag laps looking for any signs of grip.  There wasn't much, and the spray from the cars in front was blinding. 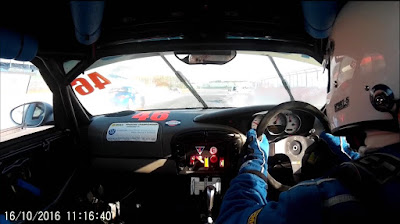 I got a flyer as the lights went out and could see I was pulling alongside the front row.  As I pulled second gear wheel spin set in and that was the end of that. I managed to salvage the first few corners in around 4th place and we spread out down he back straight looking for visibility.  I dropped back to 6th by the end of the lap, despite a nice overtake  around the grippier outside line into the final corner.  I really struggled though.  As lap times got faster mine were static and I succumbed to a couple more cars later in the race.  A brief safety car period closed us up, but again I struggled to improve my lap times as the spray reduced to finish in 6th place with DNF's from drivers who couldn't keep it on track.

The final race was dry and sunny which suited me better.  We reverted to the identical setup from Saturday for obvious reasons. Reverse grid meant was again on row two but I got squeezed at the first corner taking avoiding action to being door slammed.

I fell backwards over the next few corners and was pretty much last in class.   Re gathering myself I knew I had pace so set about catching (easy) and passing (more difficult as the legend says) the cars in front. I got 3 but was pushing too hard at times.  Auto piloting to the finish on the last lap I didn't defend my line and let a car up the inside and edge me out onto the astroturf. I fought back into the last corner nearly spinning but I knew I'd let a place slip.
As we pulled into part ferme, I counted 3 cars in front and it dawned on me I'd let slip another podium. I'd lost count of DNFs and since we have no pit wall signaller I couldn't have known. 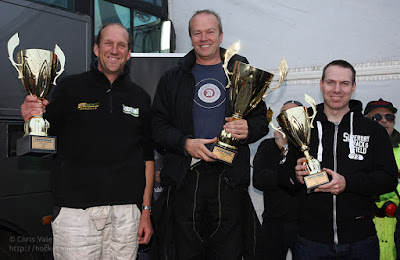 Trophy presentations followed and eveyone in the championship was full of praise as I stood on the podium for the first time, also receiving the driver of the weekend award for the significant step up in performance.   A lot to be proud of.

The Tv gives me personally some great exposure and lot of coverage as i was in the action on all three races.  Note: There is a problem with the audio levels for s lot of the video.